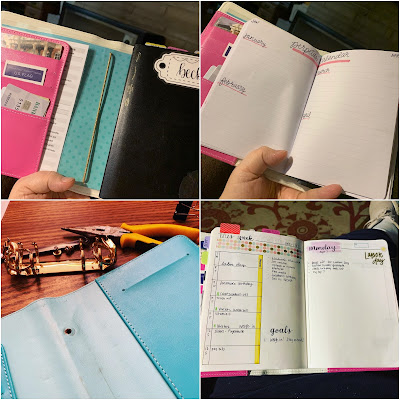 After switching to a Stalogy and realizing it would become my main method of planning, I wondered what to do with my binders.  I like to use what I have and prefer them to not become a decoration on a shelf.  I have a couple of Reflections binders that I really like, despite the fact that they are not very expensive.  As a matter of fact, the low cost gave me the courage to try a little "surgery" on them.
Again, after viewing some YouTube videos, I decided to remove the rings.  I raided my son's toolbox and with minimal effort was able to pull them off.  With the first binder, I cut a slit in the stitching, eased out the metal plate, and glued the slit shut.  This worked fine and I liked how flexible the cover was.
With the second binder, which was my favorite, I decided to not cut the stitching and instead popped off the screw posts.  This left the metal plate inside, but this was not a deal-breaker. I can also live with the post holes but again decided to try something different that I had seen on Daksina's YouTube video.
As shown in the top picture, I laminated a piece of patterned paper and inserted it in the back pocket and the front side pocket - pretty and it covered the holes.  I poked two holes in the laminated paper, top, and bottom and slid in some elastic string, which is where my reference notebook resides.
In the future, I would like to play with adding more strings to see what it would be like to have two Stalogys in one cover with maybe a couple of inserts.  I also know that I can buy a B6 Traveler's Notebook and do the same thing - so that may happen also?
Do you like changing around your planner...doing new things?
at September 17, 2020 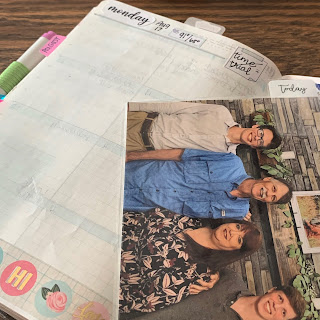 Hi everyone - welcome to Planner By Day! I've been blogging for many years, and with every new season of my life, a new blog tends to pop up! I'm a retired homeschool teacher (2020), and mom to two sons. I love paper, pens, planner, and making printables.
|more about Becky|